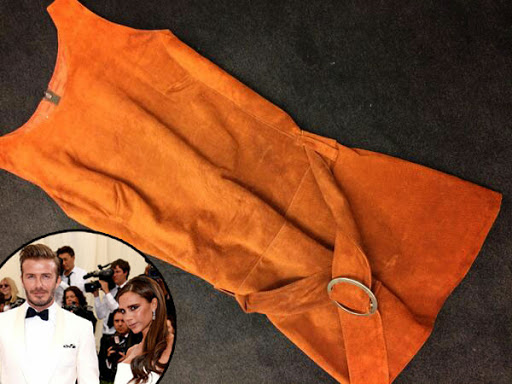 Victoria Beckham is either a hoarder, or for the non-cynics, a hopeless romantic!

Posh Spice of the Spice Girls took her Twitter fans on a ’90s fashion-filled trip down memory lane on Throwback Thursday, June 19, sharing a photo of an outfit that may have helped win her one tall, handsome David Beckham for a hubby, as well as a baby bump pic from her first pregnancy.

Victoria, whose maiden name is Adams, met her soccer star husband in 1997 at a charity match, months after the Spice Girls took the world by storm with first singles "Wannabe" and "Say You’ll Be There."

"Look what I found! The dress I wore on my first date with David!!" the 40-year-old star tweeted alongside the photo, which shows a sleeveless, orange, belted mini dress. "X so cute!! X vb."

NEWS: David Beckham spotted out with Victoria Beckham ahead of World Cup weekend!

Last year, Posh shared a photo of a London restaurant where the date took place.

The singer and designer also shared a 1998 photo that shows her at age 24, pregnant with her and her hubby’s first child and wearing a tight, dark, asymmetrical sheath dress, alongside a picture of just the outfit.

"Now look what I found!! Stretchy pregnant dress!" she tweeted. "Brooklyn in my tummy! X."

When weren theRangersin the business to make a deadline splash

The Best Looks From The iHeart Radio Music Awards

The Best Dressed Women And Men Of The Grammys