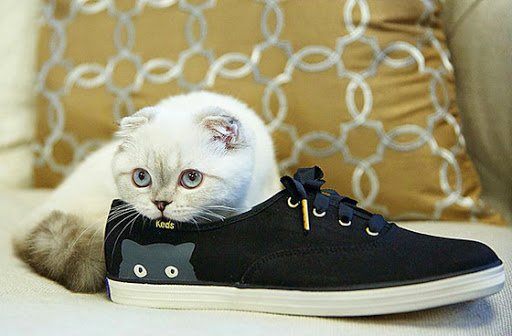 The claws may come out soon at Casa de Swift, because her cat Meredith Grey is going to be SO JEALOUS when she finds out about this.

Taylor Swift’s new kitten, Olivia Benson, is a shoe model! In a new photo on Keds’ website, the white-haired, blue-eyed Scottish Fold is seen resting her chin on top of a pair of black and white canvas sneakers with an image of a black cat printed on its sides. The "Champion Sneaky Cat" shoes are the newest addition to the Taylor Swift for Keds collection, which was launched in 2013, and the pair was recently released to stores after being announced in August.

The 24-year-old singer introduced Olivia, named after Mariska Hargitay’s character from Law & Order: S.V.U., in June when she was smaller. Big sister Meredith, a gray and white-haired, hazel-eyed Scottish fold cat, was named after Ellen Pompeo’s character from Grey’s Anatomy. Olivia has recently accompanied mom Swift on several outings in New York City, where she maintains a home.

Her Keds photo was posted weeks before the Oct. 27 release of Swift’s new album, 1989. The record, the former country star’s first major pop music release, is named after the year of her birth and contains the hit Motown-inspired single "Shake It Off," whose music video features a lot of costumes and dancing (but sadly, no cats). The new Keds design is being touted officially on the store’s website as Swift’s "1989 album release shoe."

The pair retails for $55 and also features the singer’s signature in the insole and a golden heart-shaped "TS" charm, as do all of the shoes in the collection. This pair, however, also has the date "12-13-89," Swift’s birthdate, printed on the heel.

Meredith is not impressed.

6 Tips On How To Avoid Pain When Wearing High Heels

I Would Walk 500 Miles in These Winter Season Shoes

Suit Up: Formal Accessories for Men

Not a Fan! Fashion Trends Guys Hate (But Women Adore!) 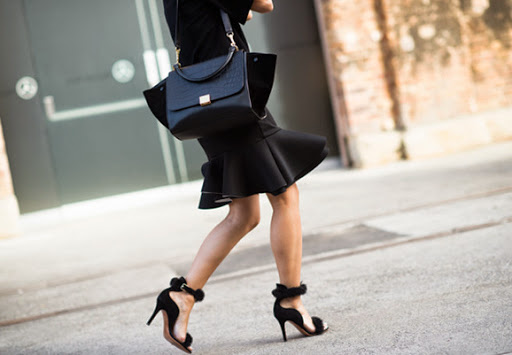 8 Clothing Items That Are Bad For Your Back