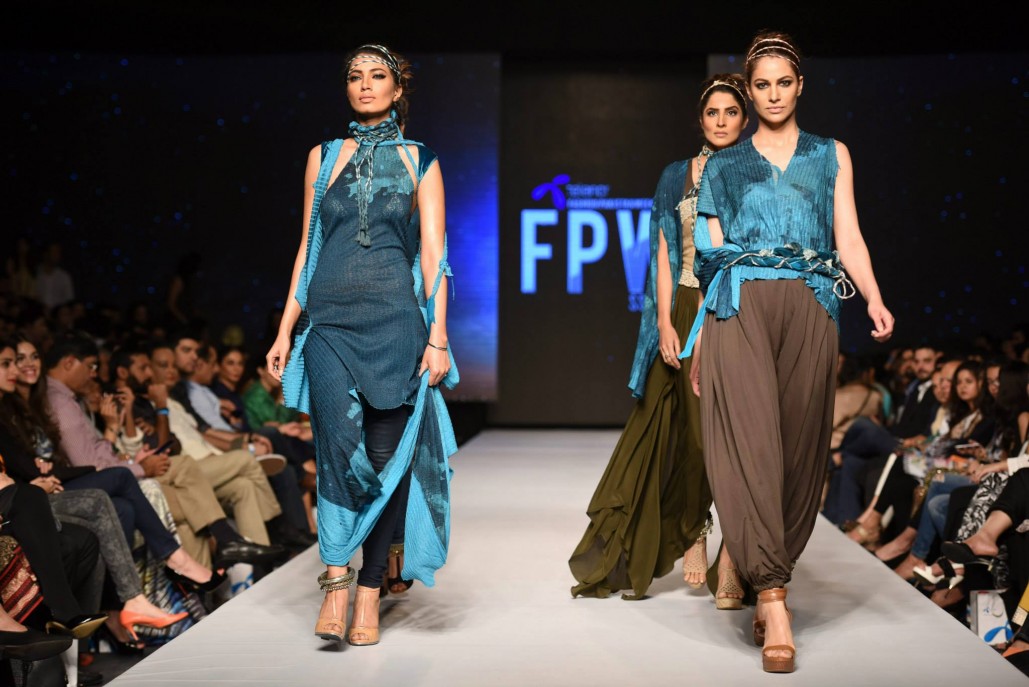 The nation of the Pakistani fledgling fashion industry knows that to keep business intact, the show must go on. Earlier this April, organizers of the Telenor Fashion Pakistan Week (TFPW) in Karachi considered postponing the event because of a major political rally, taking place in the city. Many believed it was a tough time to hold a high-profile fashion week with a guest list including political dignitaries, foreign media and a considerable number of the city’s affluent residents.

Still, prep for the Pakistani fashion event was already underway and considerable investment had been poured into the event, which would feature some of the country’s leading designers, such as Shamaeel Ansari, Deepak Perwani and Body Focus Museum by Imaan Ahmed.

In the end, the Fashion Pakistan Council (FPC) decided that risky times fall upon Karachi far too often to let this disrupt their plans and stuck to their predetermined four-day schedule.

“We had specifically timed the fashion week to take place at the very onset of the Pakistani spring to highlight trends for Spring/Summer. The designs would have been less impactful had they been showcased at a later time,” says FPC chairperson Sanam Chaudhri. “We did hike security measures and informed the foreign media we had invited of the situation. Quite a few of them backed out.”

The Pakistani fashion market was worth an estimated $7.3 billion in 2014, according to data from Euromonitor.

On one of the busiest roads in Karachi, local high-street brand Junaid Jamshed advertises its summer range of unstitched voile with the image of a headless mannequin wearing a floral print. The religious beliefs of the brand’s management dictate that a model’s face should not be seen on the billboard.

A few steps away, high-street brand Stoneage advertises its latest denim range with the image of a bare-chested man and a denim-clad female model at the beach. Clearly, the two labels reflect disparate cultural and religious values. The chances are that the latter billboard will sooner or later be removed – unless the owners pull the right contacts and pay them into acquiescence. Meanwhile, the headless mannequins will likely cover billboards across the country.

“The Pakistani fashion industry has grown in short bursts,” says Frieha Altaf, who has spearheaded fashion-based events for over two decades, including some of the initial Lahore-based fashion weeks by the Pakistan Fashion Design Council (PFDC) and the Lux Style Awards, the country’s most acclaimed award ceremony in the fields of music, film, television and fashion.

“In the 1980s, we had to contend with vigilant censors. Fashion shows could only be staged under the guise of ‘cultural events’, with traditional music interspersed in between showcases in order to fulfil the cultural requirement. During General Musharraf’s liberal military regime, in the early 2000s, there were very few checks and balances. This was the time when fashion truly mushroomed from a cottage industry to a fully-fledged business employing thousands and bringing in profits,” she adds.

“In 2010, when I coined the ‘Veet Miss Super Model’ contest, a reality TV show that could bring better groomed models into the industry, I received threatening phone calls, demanding that I stop supporting such “unholy” content. Once, some people even met me pretending to be prospective clients and then lectured me, trying to make me see the light.”

As increasing numbers of women enter the world of work, the demand for affordable ready-to-wear is growing. Local high-street brands like Gul Ahmed, Khaadi, Satrangi by Bonanza and Sapphire are embracing this market, with most selling a variety of loose tunics. Western apparel brands like Next, Debenham’s, Mango and Monsoon are also available at a few of the more fashion centers appearing on the country’s horizon, such as Dolmen City in Karachi and Centaurus Mall in Faisalabad.

The yearly influx of fresh Pakistani fashion and textile graduates is also boosting the Pakistani fashion trade, and even modeling has shed some of its shady reputation to become a viable career option for educated young girls from liberal backgrounds. Heavy-duty sponsors like Unilever, Porsche and L’Oreal are happy to associate with the glitz of the country’s fashion events. In the past, shows would be cancelled during times of political unrest, but now they only get postponed. On the flipside, stores, malls and factories may shut down for a day or two, slowing down production and bringing down sales.

Cultural considerations aside, many of the country’s highest-earning designers prefer to stay away from political or radical statements with their Pakistani fashion, simply because it doesn’t make business sense. “Most women in Pakistan don’t wear revealing clothes and I don’t want to stock anything at my store or advertise something that won’t sell,” points out Shamoon Sultan, CEO of Khaadi, one of the country’s biggest retail success stories.